Temple Dedicated To J Jayalalithaa, MGR To Be Inaugurated Today 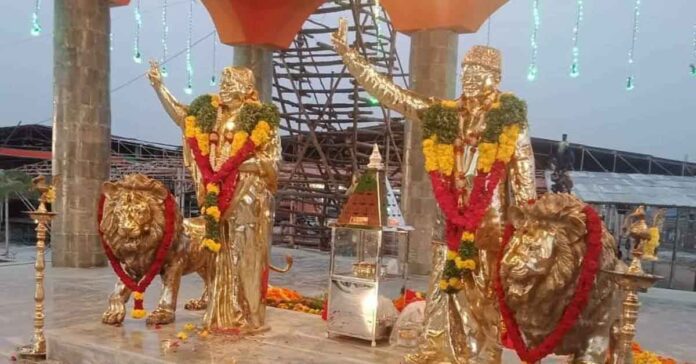 The temple has been constructed near the city’s T Kallupatti area on a one-and-a-half-acre plot at a cost of ₹50 lakh. The temple consists of two bronze statues of the two leaders.

A temple dedicated to late Tamil Nadu chief minister J Jayalalithaa and her mentor MG Ramachandran in Madurai will be inaugurated by Chief Minister E Palaniswami on Saturday. The event comes just months ahead of the assembly election, the first after the AIADMK chief’s death in 2016.

The temple — which was commissioned by the state Revenue Minister RB Udhayakumar. He was first inducted into the cabinet by Ms. Jayalalitha. The temple has been constructed on a one-and-a-half-acre plot near the city’s T Kallupatti area at a cost of ₹50 lakh. The temple consists of two bronze statues of the two leaders.

“We call our Amma (J Jayalalithaa) with different names of Goddesses like ‘Idhaya Theivam (Goddess of Hearts), Kaval Theivam (Guardian Goddess) and Kulasamy (Goddess of our Tribe), and this temple only formalises that. We have enough space around the temple for people to come and worship,” the minister said.

When the Revenue Minister was asked if the temple had been built to accumulate people’s sympathy in view of the upcoming election, the minister said, “Both MGR and Jayalalithaa have sacrificed a lot and we regard them as God and Goddess”.

J Jayalalithaa, the former chief minister, had had a considerable power in the state and her party, AIADMK. They revered her as a goddess when she was alive too. MLAs and ministers used to prostrate before her. Some of them would even worship her helicopter with hands folded and footwear removed.

A lower court had convicted the four-time chief minister in the disproportionate assets case, but the high court acquitted her later. However, she died before the Supreme Court ultimately upheld the conviction in 2017, and sent three others, including her friend VK Sasikala, to four years in jail.

The party, which was decimated in the 2019 Lok Sabha election, is desperately trying to revive Ms Jayalalithaa’s legacy to win the upcoming assembly elections. Earlier this week, the Chief Minister inaugurated a ₹79-crore phoenix-shaped memorial for the leader. The state government has also turned her Poes Garden residence into a memorial.