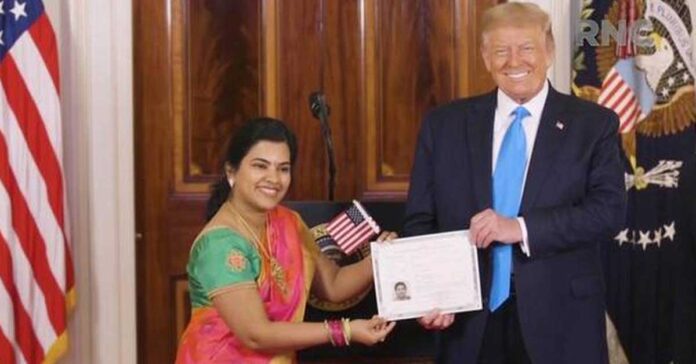 President Donald Trump had presided over a rare ceremony at the White House, which was named as the naturalization ceremony, where five immigrants, including an Indian software developer , were sworn in as American citizens. The US leader received them to the “magnificent nation” which comprises of people from every race, religion and color.

This naturalization ceremony was hosted by Trump hosted at the White House. The video of the ceremony was played later during the second night of the Republican National Convention on Tuesday.

Five immigrants from five countries – India, Bolivia, Lebanon, Sudan and Ghana, received this honor in a line during the ceremony in the White House.

They were administered the Oath of Allegiance by Acting United States Secretary of Homeland Security Chad Wolf. They had to raise their right hand and a US flag in their left hand while taking the oath. Trump looked on.

Trump said the newly sworn-in American citizens followed the rules, obeyed the laws, learned the nation’s history, embraced American values and proved themselves to be men and women of the highest integrity.

Later, Trump read out the names of the five new citizens and gave details about them too. A software developer from India, Sudha Sundari Narayanan, was among those sworn in as American citizens.

Talking about the Indian, Trump said that Narayanan is a “phenomenal success”. He said that Sudha was born in India, came to the United States 13 years ago. He said that, Sudha is a talented software developer and that the couple are raising two beautiful, wonderful children.  He thanked and congratulated the couple and then handed the Certificate of Citizenship to Sudha Narayanan, who was wearing a bright coral pink sari.

Likewise, Trump congratulated the new citizens of other countries and said that it was  an honor to be with them. He added that with the rights and freedoms each of them now enjoy as citizens, there is no dream beyond their wildest reach because Americans can do anything.

Trump said that the five new citizens who have pledged their “undying loyalty” to the American people, the American Constitution and the American way of life are the future stewards of the magnificent nation.