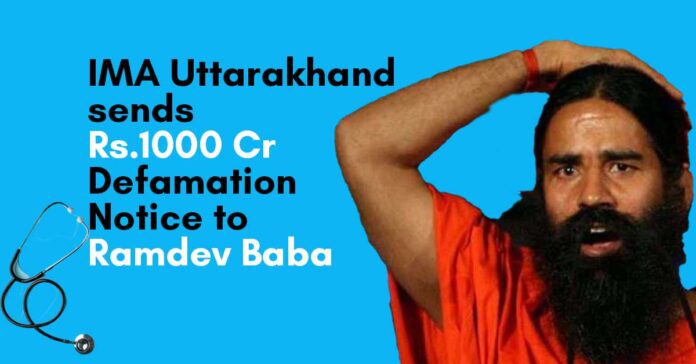 The Indian Medical Association(IMA) Uttarakhand sends Rs.1000 crore Defamation Notice to Yoga Guru Ramdev baba. In the notice sent by IMA, it is stated that he must post a video countering the statements given by him. Moreover, they asked him to a give a written apology within the next fortnight. Else, a sum of Rs.1000 Crore will be demanded from him.

Yoga Guru Baba Ramdev, remarked on Allopathy doctors, which is the reason for the flak. The National Voluntary Organization of doctors issued the notice to Ramdev.

Subsequently, they stated that if he doesn’t post a video countering the statements given by him and also demanded him to give a written apology within the net days, else the demand for the sum of 1000Crore will arise.

Ajay Khanna, the President of the organization informed that they sent a letter to the Chief Minister and Chief Secretary on Monday. Hence, the Union Governments also sent a similar kind of notice to Baba Ramdev. In which it is stated that his statement is incorrect.

Earlier, Baba Ramdev withdraw his statements. He received a strong letter from the Union Minister for Health, Dr. Harsh Vardhan. The minister said that the remarks made by Ramdev on Allopathic medicine as “inappropriate”

In reply to the Union Minister’s letter, Baba Ramdev wrote. “We do not oppose modern medical science and allopathy. We believe that Allopathy brought in immense progress in surgery. It is a life saving system and serves humanity. Undoubtedly, my statement has been quoted as part of a What’s app message that I was reading during a meeting of volunteers. I am sorry if it has hurt anyone’s statement”

ALSO READ: FIR against Ramdev, others for claiming to develop cure for coronavirus

According to NDTV, Baba Ramdev loses his cool on camera and threatened a journalist, when he was...