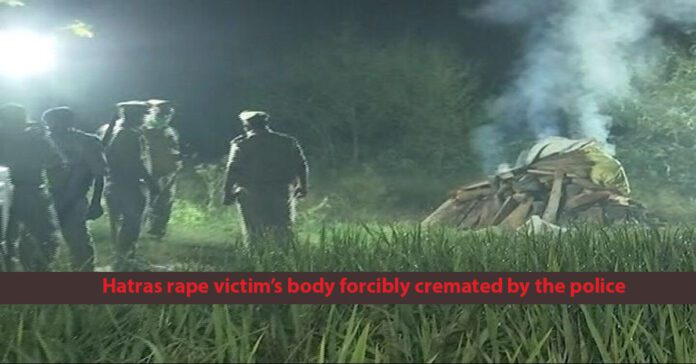 The body of the rape victim of the Hathras case was forcibly taken away by the police in the middle of the night for final rites. The family claims that they have not been able to see the body of their daughter too.

The family of 19-year-old Dalit woman from Uttar Pradesh’s Hathras, has alleged that she was forcibly cremated by the police. She had died in a Delhi hospital of injuries sustained when she was gang-raped.  The woman’s body was taken away by the police in the middle of the night for final rites.

The woman’s brother said that the police have forcibly taken the dead body, and the father along with them for cremation. When the father reached Hathras, he was immediately taken (to the crematorium) by the police,

The body of the woman reached her village around midnight. In spite of the protests of the villagers that the cremation cannot be done at midnight, the cremation was done by 3 am on Wednesday.

The villagers and relatives of the woman wanted to take the body of the woman to her house, but the administration and the police pushed for cremation at the earliest. Though the passage for the ambulance was blocked, the cremation took place in village forcibly.

Superintendent of Police (SP) Vikrant Veer denied any “urgency” by police in the cremation and said that the the cremation of the woman was carried out by the family members.  Despite the fact that the cremation usually do not take place in the night.

He added that the cremation was done as usual after the body reached Boolgarhi village in Hathras district. He claimed that the situation is under control and the relatives are calm in the village, but heavy police force has been deployed just in case of some untoward incidents.

The woman was raped in Uttar Pradesh’s Hathras village by four men on September 14. She died fortnight later after battling serious injuries. The woman was first taken to Jawaharlal Nehru Medical College and Hospital in Aligarh, but shifted to Safdarjung Hospital in Delhi after her condition deteriorated.

She was in a critical condition and on ventilator support.

The brutality against the teenager has sparked outrage across the country with several political leaders, Bollywood actors and activists demanding justice for her.

The four people accused of raping the woman have been arrested.

ALSO READ:  Girl out to buy groceries in Ratlam , MP; Gang-raped by 3 men, drowned in pond