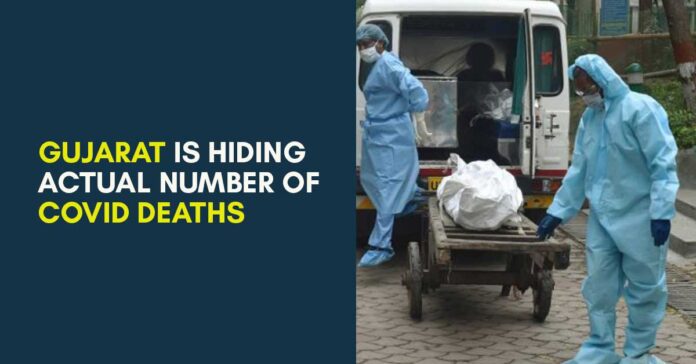 New cases of Corona and deaths are increasing rapidly. However, the government has it’s own statistics. Districts like Surat, Bhavnagar, Ahmedabad, Rajkot and Jamnagar are the worst effected. It is said that large queues are there at the crematoriums. Despite all these, the gujarat is hiding the real figures of covid deaths.

When the data was scrutinized for the last 71 days, it is seen that the deaths are 4,128, whereas the number of death certificates are 1 lakh and 33 thousand. Now the question is ‘Did 1.25 lakh people die natural deaths?

When questioned about this the government said that 80% of the population suffering from covid deaths of other complication besides Hypertension. 38% died due to Hypertension in the state. 28% died due to diabetes and kidney related diseases. 14% of them died to minor illnesses after contracting with corona. 4% of deaths due to blood clotting.

On checking the death certificates, it is shocking to see that 60% of the deaths were of patients who belonged to 45+ years old. 20% of the dead were less than 25 years of age.

When the Chief Minister was asked about hiding the correct figures of the dead, he denied hiding the figures. Mr. Vijay Rupani said that those who died to co-morbidity are not included in the figures who died of corona. Furthermore, he said that if a person has corona and is suffering from serious diseases related to diabetes, heart or kidney, then his death is not considered as corona.

While granting bail to Jignesh Mevani, the Barpeta court in Assam requested the High court to take...
International

UK PM Boris Johnson on Thursday landed in Gujarat’s Ahmedabad for a two-day visit to India. He...
Activism

Journalist Rana Ayyub, a columnist for the Washington Post, was stopped from flying to Europe.  According to...
International

Gujarati family ‘Frozen to Death’ while pursuing their ‘American Dream’

A Gujarati family of four which included a three-year-old child died, while pursuing their American dream. They...
Health

Maharashtra and Delhi have reported to reached the highest number of 54 cases of COVID's new variant,...
News

A young woman's head was tonsured and her face was blackened by villagers in Gujarat's Patan as...
News

Covid-19 Pandemic has brought things from better to worse for some. Most of them lost their loved...
Load more