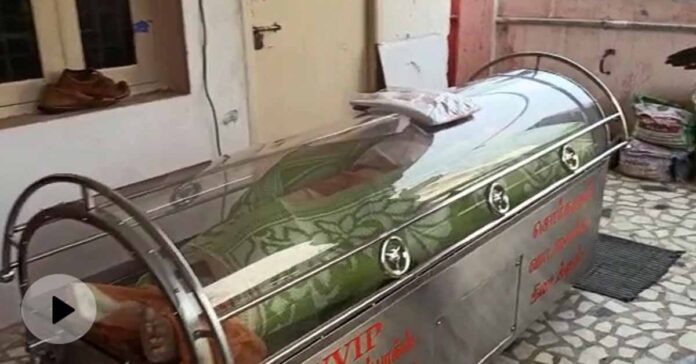 An executive found a man found alive on Tuesday when he came to take back the freezer box.

In an outrageous incident that has sparked anger, a 74-year-old critically ill man in Tamil Nadu’s Salem district was rescued on Tuesday from a freezer box. He was discharged from a hospital and his family allegedly was waiting for him to die. He was made to lie overnight in the box, used to store bodies.

An executive found a man found alive on Tuesday when he came to take back the freezer box. The brother of the 74- year old had taken the freezer from an agency. The executive alerted and tried to arrange help.

The man – identified as Balasubramania Kumar – has been admitted to a hospital, shows the 74-year old man gasping for breath inside the box.

An executive of the agency that gave the freezer box to the family alerted everyone on seeing the man alive,  and rescued the man. Officials probing the incident said the 74-year-old man was recently discharged from a hospital in a critical condition. However, his brother had asked for a freezer box as he allegedly waited for him to die.

Deivalingam, an advocate voluntarily provides free vehicles to carry bodies. On hearing the news he rushed to the man’s home. He said that the man was kept inside the freezer the whole night. The agency executive panicked and alerted the advocate. The family said that – ‘The spirit has not left and we are waiting’.

The police officials probing the case registered a case of negligent conduct and endangering life.

The old man had retired from a private company as a storekeeper, according to the police. He lives with his widowed brother and a niece who is differently-abled.