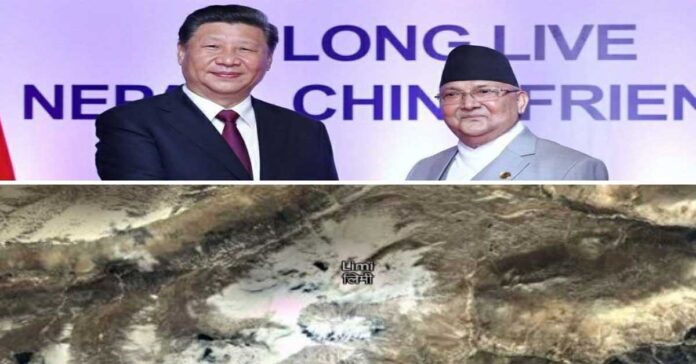 With expansionist policies in place, China has continued to invade Nepal inch by inch and constructing buildings on the captured lands. As per a report by Khabarhub, the recent images from the Lapcha-Limi region of Humla, China has built eight buildings so far in the area. However, Nepali Prime Minister Oli, who has been vocal on capturing Indian land claiming it to be part of Nepal, is silent on Chinese invasion.

Humla’s Assistant Chief District Officer Dalbanhadu Hamal was reportedly shocked to see the recent images of the area and launched an investigation into the matter. Local Nepali people have also complained about the harassment they have to face in the hands of the Chinese military. The Nepali District Officials inspected the area from 30th August to 9th September.

As per IFE News Network’s sources,  the district administration alarmed PM Oli, but no reply has been received so far. The locals are fearful that the Nepali administration has made some secret deal with the Chinese military to allow them in the area. The reports suggest that the buildings are visible from a distance. However, the district officials could not get a closer look due to the heavy presence of PLA troops.

The media reports in Nepal suggest that after learning about the incident, Nepal’s Ministry of Home Affairs (MoHA) has forwarded the case to Nepal’s Ministry of Foreign Affairs. Khabarhub quoted a member of the monitoring team saying, “We could see the buildings from a distance. We had heard rumors about a building being constructed by China there but found eight more in our visit.” To investigate the case further, a team comprising of CDO Chiranjeevi Giri, along with heads of all four security bodies, are visiting Lapcha for a week.

While China’s PLA is invading Nepal, the government of Nepal under the leadership of Communist leader KP Oli is busy in making bizarre claims on Indian land. So far, Nepal has said in official statements that Indian territories including Nainital, Dehradun, Lipulekh, and Limpiyadhura belong to Nepal. In June there were reports that China has taken over 10 locations in Nepal.