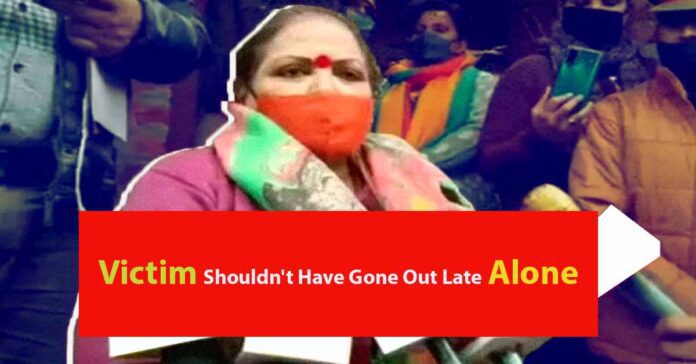 ‘Even under any influence, a woman should keep track of time, and should not venture out late,’ said Chandramukhi Devi of the National Commission for Women.

There was an uproar when a member of the National Commission for Women (NCW), Chandramukhi Devi, stoked controversy on Thursday, when she commented on the Badaun gangrape and murder incident. This incident in which a 50-year-old Anganwadi worker was the victim. She said that the incident could have been avoided had the victim not gone out in the evening.

She spoke to the media after meeting the family of the victim. She said, “Even under any influence, a woman should keep track of time, and should not venture out late. Perhaps, had the victim not gone out in the evening, or gone along with a family member, she could have been saved.”

Her remarks have created an uproar, which compelled the NCW chairperson, Rekha Sharma, to give a clarification. Rekha Sharma took to Twitter, she said that she does not have an idea as to why her colleague had made the statement.

The gangrape-and-murder of a 50-year-old woman in the Ughaiti area of Uttar Pradesh’s Badaun district on Sunday, January 3, by a local priest and his two accomplices has sparked outrage across the country.

Since laxity was found on the part of the local police, the NCW took cognizance of the issue and sent a two-member NCW team to the village to enquire into the matter on Thursday, of which Chandramukhi Devi was part of the team.

After investigating the spot where the incident is believed to have taken place and meeting the victim’s family, the NCW member said “If the police would have shown swiftness in the matter, perhaps they could have saved the victim,” she also said that she was not satisfied with the role of police in the incident, especially regarding the filing the first information report (FIR) by the police gathered momentum. The FIR was registered only two days after the autopsy confirmed rape and the two accomplices of the priest were nabbed.