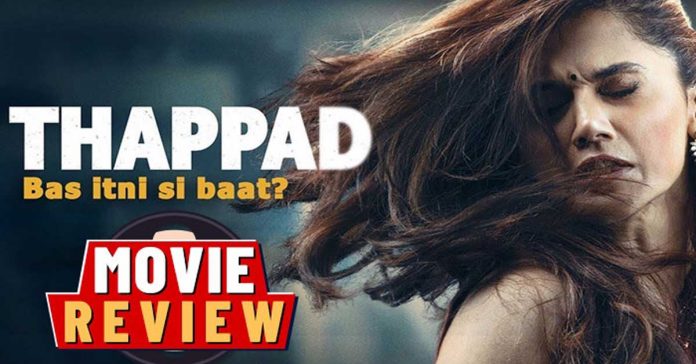 Thappad is a silent hit about our society which believes in the old traditions and customs that no matter what woman should be humble enough to face any kind of domestic violence. The society still feels that “In Marriage, we can do anything.” But should it be that way? There should be a change in thinking and hence talks about it.

This story is an about a loving and a supportive family from Delhi, and a trained Indian Classical Dancer, Amrita. Amrita could have been a very successful dancer or any other career but she follows a dream of being one of the best housewives ever. She gives up her love for dancing too.

On the other side, Vikram is a go-getter and has his head and heart all set for his goals. He would do anything and everything to make his dreams happen.

He works hard and when he comes to the brink of his success he had to face failure for which he blames his officials and office politics. He start arguing with his officials in a party where Amrita tries to pacify him but he slaps her infront of all the guests.

The life of this couple takes a ugly turn with lots of emotional drama, where one slap turns out to be an end of a marriage.

This movie is made by Anubhav Sinha which gives a message oriented one for the society.

Cyberabad police busted a major sex racket where 14,000 victims are involved. According to the police, staffers...
Load more
Thappad is a silent hit about our society which believes in the old traditions and customs that no matter what woman should be humble enough to face any kind of domestic violence. The society still feels that "In Marriage, we can do anything." But...Thappad-Movie Review