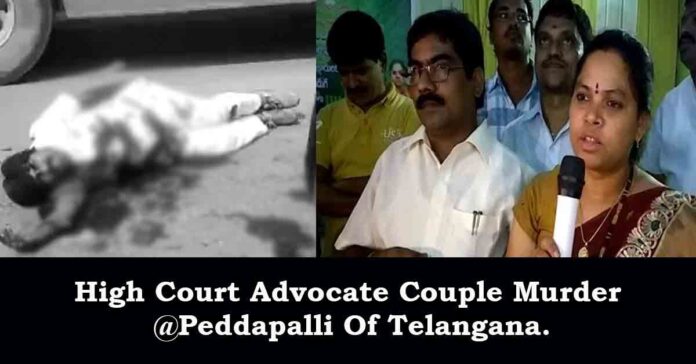 Hyderabad: In broad daylight, a lawyer couple Gattau Vamana Rao and wife P.V. Nagamani were brutally murdered at Ramagiri near Ramagundam in Peddapalli district of Telangana.

According to eye witnesses, two unidentified persons who came in a Creta car intercepted their car. They used sharp weapons to hack the couple to death. The scenes at the murder site have shocked the state.

According to the family, the couple were travelling in a car when a group of unidentified men intercepted them and killed them. It is to recall that in 2020 the Telangana High Court instructed State- Director General of Police to ensure proper security is given to the couple as both were facing threats.

The then Bench comprising of Chief Justice Raghvendra Singh Chauhan and Justice B Vijaysen Reddy directed the Telangana DGP not to call the couple to any police station. This is after practising lawyer Ms Nagamani wrote to the Chief Justice stating that a person by name Sheelam Rangaiah died in the custody of Manthani Police station under Ramagundam Police Commissionrates.

This letter was converted into a PIL petition and the High court issued notices to the government. The court also instructed Hyderabad– Police Commissioner Anjani Kumar to probe into the custodial death of the man.

Following this IPS officer in June 2019 presented a report to the High court. In this regard, Ms Nagamani had filed a counter-affidavit. Trouble began to brew when Nagamani complained to the High court that she was being harassed at her native places of Manthani and in Hyderabad.

She told the court that her husband Gattu Vaman Rao who is also practising law, was being falsely implicated in a case registered in a different police station under Ramagundam. ‘My life is in danger, and I am receiving threatening calls.

My children are also facing life threats,” she told the High Court. On 17 February, the couple were murdered in Ramagundam district of Telangana.