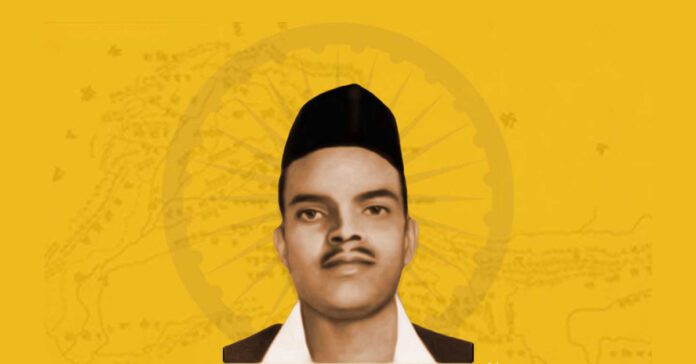 India celebrates the birth anniversary of the great revolutionary Shivaram Hari Rajguru who was an associate of Bhagat Singh and Sukhdev on 24 August. AT a young age of 15 years, he walked to Varanasi where eventually he meets with his fellow revolutionaries.

Shivram Hari Rajguru was born in a Brahmin family in Maharashtra. The fatherless boy was good at studies.He walked to Varanasi were he started his studies and met his fellow revolutionaries. He was inspired by Lokmanya Tilak’s revolutionary ideas. He died for the country at an age when most youths dream of careers.

Shivaram Hari Rajguru, a part of the Bhagat Singh-Sukhdev-Rajguru revolutionary trio that faced the gallows while fighting the British Empire.

His parents were mother Parvati Devi and father Harinarain Rajguru and they belonged to a Brahmin family. His father passed away at an early age, when he was only six years old. His elder brother Dinkar took his responsibility and his widow mother, he send his brother to school to get proper education. He got his primary education at Khed and he studied further from Poona in New English High School. He had inherited Lokmanya Tilak brand of patriotism not the Satyagraha version of Mahatma Gandhi.

At the age of fifteen he left home and decided to join the heart of the revolutionary movement and walked 6 days to reach Varanasi. In Varanasi, he acquired admission to study at a Sanskrit Mahavidyalaya (Higher studies school) and eventually he had found his fellow revolutionaries.

At sixteen, he joined the Hindustan Socialist Republican Association, aiming to be a part of the armed struggle to overthrow the British colonizers.

The Simon Commission visited Lahore, Lala Lajpat Rai held a peaceful protest against them on 30 October 1928.  The superintendent of police, James A Scott, ordered his men to lathi charge the protesters. Lala Lajpat Rai was badly injured in this, and he died on 17 November 1928.

Sukhdev Thapar, Bhagat Singh, Chandrashekhar Azad, and Shivram Rajguru decided Officer Scott must pay for the death of the Lion of Punjab.

Bhagat Singh signaled to shoot John P. Saunders, an Assistant Superintendent of Police, it was a case of mistaken identity. He was shot by Rajguru and Singh while leaving the District Police HQ in Lahore on 17 December 1928. Chandrashekhar Azad provided the cover fire to help the revolutionary brothers escape.

They then dispersed to carry out further revolutionary activities later. Rajguru headed to Pune. RSS founder Dr Keshav Baliram Hedgewar arranged for his secret stay. Later, as the 20-year-old headed to Pune, he was arrested by the police.

The trio sang revolutionary songs to the gallows

At the banks of the Sutlej river in the Ferozepur district of Punjab, the trio were cremated in a huff by the British at Hussainiwala. The families of the freedom fighters were not happy with this decision.

A memorial stands at the place today. Rajguru’s birthplace Khed was renamed Rajgurunagar in his memory after India gained independence.