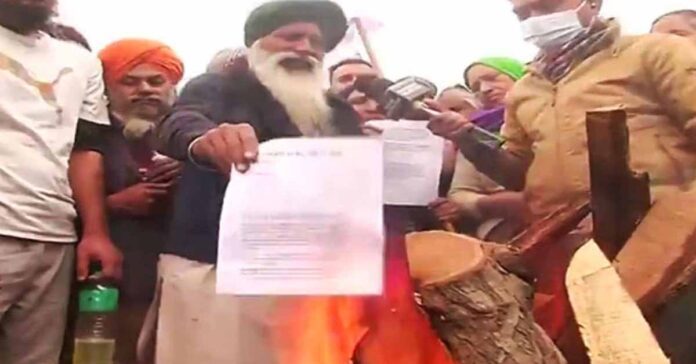 Protesting farmers made special efforts to publish and distribute several copies of the farm laws in Punjab and Haryana to burn them in villages and districts while celebrating Lohri festival.

Several copies of the laws in Punjab and Haryana to burn them in villages and districts while celebrating Lohri festival.

Protesting farmers as Singhu border said “Lakhs of copies of the laws have been distributed among farmers, By doing this, we want to exert pressure on the Centre to take back these farm laws,”.

Lohri, a famous Punjabi winter folk festival is celebrated mostly in North India. It is celebrated mostly in Punjab to mark the end of winter and the onset of the spring season. To celebrate this festival, Hindus traditionally light bonfires, socialize around the fire, sing and dance together. Bonfires are a special characteristic of the festival.

The protesting farmers had earlier announced that they will light bonfires by burning the copies of farm laws at all protest sites in the evening to celebrate Lohri.

Farmers’ leader Manjeet Singh Rai announced at a press conference at the Singhu border, one of the protest sites, “We will celebrate Lohri on January 13 by burning the copies of the farm laws,”

Sankyukt Kisan Morcha, an umbrella body of around 40 protesting farmer unions, had summoned an urgent meeting later in the day to discuss their next course of action. On Tuesday, the Supreme Court had issued a stay on the implementation of the controversial farm laws till further orders. The Supreme Court had also set up a four-member committee to resolve the farm laws issue.

Subsequently, the protesting farmer unions had yesterday refused to accept the panel appointed by the Supreme Court. Farmers have felt that the panel was a pro-government panel, hence refused to appear before it.

The unions also expressed that they won’t compromise for anything less than the repeal of the three contentious laws while raising doubts over the neutrality of the members of the committee.

ALSO READ: All 4 Members who support Govt’s Farm Laws are in the of SC Appointed Committee