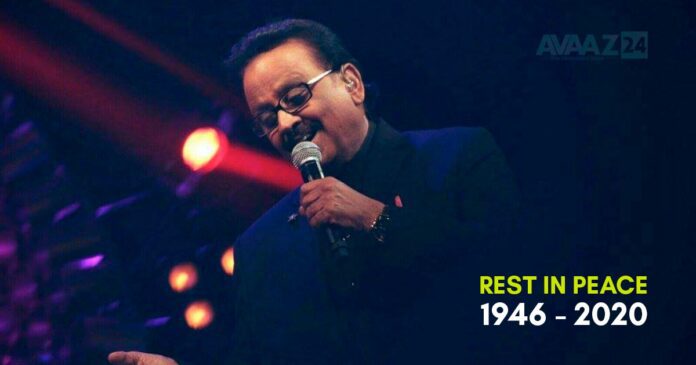 Multiple National award-winning singer SP Balasubrahmanyam, who has been hospitalized since August 5 after he tested positive for the coronavirus, dies on Friday at MGM Health Care hospital in Chennai.

Sripathi Panditaradhyula Balasubrahmanyam is an Indian musician, playback singer, music director, actor, dubbing artist and film producer who worked predominantly in Telugu, Tamil, Kannada, Hindi and Malayalam. He was born on 4 June 1946. He is also referred to as S. P. Balu.

He has received 25 Andhra Pradesh state Nandi Awards for his works towards Telugu cinema, numerous other state awards from Karnataka and Tamil Nadu. In addition, he received the Bollywood Filmfare Award, and six Filmfare Awards South.

He received the state NTR National Award for his contributions to Indian cinema in 2012.   He was honored with the Indian Film Personality of the Year consisting of a Silver Peacock Medal, in 2016. He has also received the civilian awards such as Padma Shri (2001) and Padma Bhushan (2011) from the Government of India.

P. Balasubrahmanyam was a native from Nellore into a Telugu family. His father, late S. P. Sambamurthy, was a Harikatha artist who had also acted in plays. His mother was Sakunthalamma, who died on 4 February 2019.

He is survived by his wife Savithri and two children — daughter Pallavi and son SP Charan. His son S. P. Charan is also a popular South Indian Singer, Actor and a Producer, confirmed the news.

Balasubrahmanyam developed an interest towards music at an early age, studied notations and learned music. He yearned to become an engineer discontinued it due to health issues.

He continued to pursue music during his engineering studies and won awards at singing competitions. In 1964, he won the first prize in a music competition for amateur singers organised by the Madras-based Telugu Cultural Organization.

He was selected as the best singer in a singing competition which was judged by S. P. Kodandapani and Ghantasala. He often visited music composers seeking opportunities.

Balasubrahmanyam made his debut as a playback singer on 15 December 1966 with Sri Sri Sri Maryada Ramanna, a Telugu film scored by his mentor, S. P. Kodandapani.

He has the rare distinction of rendering the most songs on a single day by any singer. He has recorded 21 songs in Kannada for the composer Upendra Kumar in Bangalore from 9:00 am to 9:00 pm on 8 February 1981 and 19 songs in Tamil, 16 songs in Hindi in a day which is a notable achievement and a record. He established a prolific career for himself.