How Col. Santosh Babu fought the Chinese in Galwan Valley and led his troops 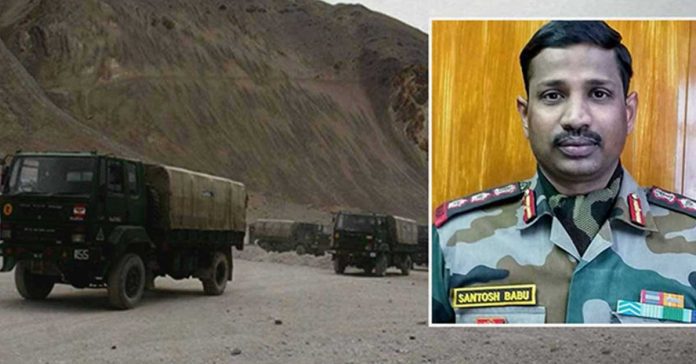 Col Santosh Babu was critically injured in a violent face-off, but he refused to be evacuated. He stayed at the spot, led his men from the front, sent the injured back and called for reinforcements.

On the night of June 15, when Indian and Chinese troops had a violent face-off in Ladakh’s Galwan Valley, Colonel Santosh Babu was leading the Indian troops from the front.Colonel was very polite but very firm while negotiating with the Chinese. He suffered grievous injuries from stones that were pelted by Chinese troops. Instead of being evacuated he led his men to handle the situation on the ground.

Few details which have come to light, inform us about the unparalleled valour displayed by Col Santosh Babu while engaging with the Chinese troops at the Line of Actual Control (LAC) in Galwan Valley.Col Santosh Babu, the Commanding Officer (CO) of the 16 Bihar infantry battalion of the Indian Army, tried to ensure that the Chinese have moved back beyond Patrolling Point 14 in the Galwan Valley and personally verify these details.

Following the June 6 Lieutenant General-level talks between India and China, disengagement between both sides had begun at Patrol Point 14, since both had mobilised very close to the LAC.The Chinese troops initially withdrew from their position, dismantled their camp after the high-level talks.  Col Santosh Babu, personally held talks with his Chinese counterpart in the region.

Conversely, all of a sudden, a Chinese party set up an observation post at the LAC on June 14. Col Babu informed the Chinese commander that the observation post and the tents were illegal and that they have to abide by the agreement arrived at the June 6 meeting.According to the protocol, a Major-rank officer would be asked to visit the spot and handle the situation, but for the reasons unknown, Col Babu decided to personally go and lead his men.

When Col Babu and his men reached the location, they noticed that these were not their local familiar Chinese counterparts but could see that they were roped in from outside at a short notice.Col Babu then started a conversation with them and asked why they have re-erected the post despite the June 6 meeting. However, a Chinese soldier stepped up and pushed him hard backwards with offensive words in the Chinese language.

The Indian soldiers were enraged and pounced upon the Chinese troops, when their CO was attacked in this manner.  The conversation turned into fist fight which lasted about 30 minutes. The Indian team prevailed but there were injuries on both sides. The Indian troops also destroyed and burned the Chinese post to ashes. The Chinese retreated from there. The tempers of Indian soldiers were still very high, as Col Babu was grievously injured. Col Babu is said to have calmed them. He refused to be evacuated.

As suspected by Colonel Santosh Babu, the Chinese soon returned with massive reinforcements. The Chinese troops attacked with iron rods and spikes, Indian soldiers led a bayonet charge. Though heavily outnumbered, the Indian soldiers continued to fight under Col Babu’s leadership. . He stayed at the spot, led his men from the front and sent the injured back and called for reinforcements.

More Chinese troops, of the ‘new’ kind, were waiting in positions, both on the banks of the Galwan river as well as in positions up on a ridge to the right.they started pelting large stones on the Indian soldiers. Unfortunately, at about 9pm, Colonel Babu was struck on the head by a large stone, and he fell into the Galwan river. The assessment is that it may not have been a targeted attack on Col Babu, but in the outbreak, he was struck.

Bodies piled up in this second brawl which lasted nearly 45 minutes.  When the Indian soldiers established that their Commanding Officer’s suspicions were proven right and he was killed in front of them, things were at an emotional peak.Then the crucial aspect of the second  brawl was that the fighting spread into several different pockets across the LAC. While many imagined it to be one big crowd of men fighting each other like a mob, the brawl actually separated into different groups, with nearly 300 men fighting each other.

When the fighting stopped, several bodies of both Indian and Chinese troops were in the river, including the Indian Commanding Officer Col Babu. Colonel Babu’s body and those of some of the other jawans were carried back to the Indian side, while the rest of the Indian team remained on the Chinese side taking stock of the situation.