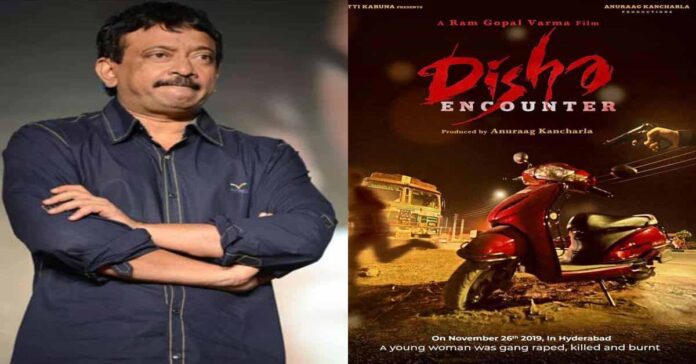 The family moved to court and objected to making a film on the deceased,  when a judicial commission constituted by the Supreme Court is inquiring into the case.

The victim’s family had approached the Telangana High Court seeking a restraint on the film’s release. They are seeking action against Ram Gopal Varma’s film titled Disha Encounter. This film is based on the brutal gangrape and murder of a Hyderabad veterinarian in 2019. RGV who is known for his controversial films also attempted to make a film on the Pranay murder case in Miryalguda, earlier. The release of this film was stayed by the court.

Disha’s family filed a petition with the Telangana High Court seeking the court’s intervention, on Friday. The family has requested the court to order the Centre, state government and Censor Board to hold back the release of the film by director Ram Gopal Varma. The counsel for the petitioner wanted a ban on the film.

The Telangana High Court closed the petition, directing authorities to take action if a representation is made to them to not release the film. The movie is based on the circumstances surrounding the gang rape and murder of the Hyderabad veterinarian in 2019.

The four men who were accused in the crime were encountered by the Cyberabad Commissionerate police alleging that they tried to escape during evidence collection. The body of the woman was found burnt at Shadnagar 23 kilo metres from where she was murdered at Shamshabad.

The poster and trailer of the film titled Disha Encounter were released by the filmmaker. The film is awaited release on November 26.

On hearing the petition filed by the woman’s father, Justice P Naveen Rao, requested the Central government counsel to expeditiously resolve the representation.

The family had also sought a direction to the state home department and Central Board of Film Certification (CBFC) authorities to not allow RGV to release the film.