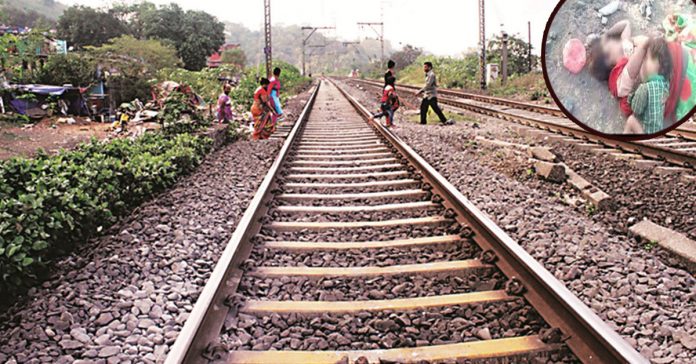 The body of the woman and the toddler, who was crying and sucking his mother’s breasts.  The body of the mother was found near a railway track in Madhya Pradesh’s Damoh, nearly 250km from Bhopal.

A woman lay dead along the railway tracks with her one year old son clinging to her chest. The one year old baby, who was unaware of his mother condition tries to breastfeed.

He cried and shook his mother, not realizing that she won’t wake up.

The wounds on the woman suggests she might have fell off a train or she was hit by one on the back of her head, and the wounds  and bleeding killed her, though not immediately.

Residents there discovered around 6am the woman and the toddler: sucking his mother’s breasts and nibbling on a biscuit alternately.

They informed railway police and some of the onlookers shot cell phone videos and posted them on social media. The posts were shared extensively and activated child welfare activists.

The mother was probably holding the baby close to her chest when she fell, which saved the child.

“She was injured but probably conscious … opened a biscuit packet and gave some to the child. She breastfed her child to ensure he survives,” the officer said.

“The child wailed aloud when he was separated from his mother.”

His heartrending cries shook Tiwari and the onlookers. “…it shakes you to the core, however hardened you have become over the years,” he said.

This incident moved everyone around except for the officials at the town’s government hospital where police took the corpse and the child.

The child was refused admission as he can’t pay an admission fee of Rs 10. The boy was kept waiting until ward boy Tarun Tiwari came forward with the money to ease the bureaucratic inconvenience.

The body was sent for autopsy, while the “orphaned” boy was shifted to a children’s home.

“We will publish notices … If his family members come, we will verify their credentials and hand him to them,” Vidyarthi said.

Police are trying to identify the woman.

ALSO RAED :  Eyewitness of Aurangabad train incident: It happened in a fraction of a second