The PIA Airbus A320 was carrying 91 passengers in which 31 women and nine children along with eight crew members.At least 82 dead as Pakistan plane crash into crowded Karachi colony.

At least 82 people were killed when a Pakistan International Airlines (PIA) plane with 99 people on board crashed into a densely populated residential area near the Jinnah International Airport in Karachi on Friday afternoon.

Sindh Health Minister Azra Pechuho told the media late Friday night that 82 bodies have been recovered from the site of the crash so far. However, it is unclear if the deceased were all on board the flight or include residents of the area where the crash took place.

Few insights about the crash:

Flight PK-8303 from Lahore crashed at the Jinnah Garden area near Model Colony in Malir minutes before its landing in Karachi. It crash-landed into the Jinnah Housing Society located near the airport.

“The aeroplane first hit a mobile tower and crashed over houses,” witness Shakeel Ahmed said near the site, a few kilometres short of the airport.

The majority of the residents of the colony are people, who migrated from India in 1947 during partition. These people or their ancestors had come from Uttar Pradesh or Bihar.

“We don’t know exactly how many are injured as yet as we were already in an emergency situation due to Covid-19 (outbreak)…,” Sindh Health Minister Azra Pechuho said.

Faisal Edhi of the Edhi Welfare Trust said that around 25 to 30 residents whose houses were damaged by the plane have also been taken to the hospital, mostly with burn wounds. 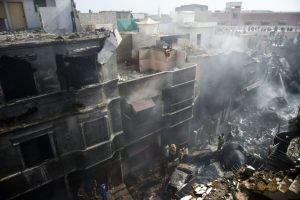 The aircraft wings during the crash landing hit the houses in the residential colony before crashing down. Several houses and cars damaged in the society where the aircraft crashed

“At least 25 houses have been damaged in this incident,” Edhi said.

At least four people have been pulled out alive from under the debris. Bank of Punjab President Zafar Masood, who was a Premium Economy passenger on the flight, survived the crash. He is in the hospital from where he called up his mother to inform her of his well-being. The bank said he had suffered fractures but was “conscious and responding well”.

The CEO of Pak PSU Urban Unit, Khalid Sherdil, was also among the survivors.

Another passenger Ammar Rashid, who was on the plane, survived the crash and is being treated for his injuries at a nearby hospital, his family said on social media.

Engineer Mohammed Zubair, seated on 8F, also survived the crash and is admitted in a hospital. 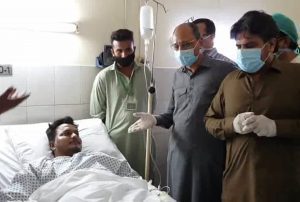 Pakistani actress Ayeza Khan took to Instagram to refute rumours of her and husband, Danish Taimoor, being on the PIA flight.

However, Pakistani model Zara Abid, who was among the passengers on the ill-fated PIA flight, is feared dead.

According to a PIA official, the captain informed the air traffic control that he was having problems with the landing gear before the aircraft disappeared from the radar.

The cause of the crash is yet to be confirmed. PIA chief executive Air Vice Marshal Arshad Malik said the pilot had told traffic control that the plane was experiencing “technical difficulties”.

Malik rejected reports that the plane had problems even before flying. Talking to the media, he said the aircraft was completely safe and sound. He said all checks and procedures were done and “technically as well as administratively everything was in place and perfect”.

The plane came for landing but just before landing the pilot said he was going for a go-around. While coming for a second landing, it developed some problems and crashed.

“The real cause of the mishap will be known after inquiry, which will be free and fair and it will be provided with media,” he said. Malik said that the entire operation will take two to three days to complete.

A four-member board of inquiry to know the cause of the crash is set up by Pakistan.

The pilot told air traffic controllers he had lost power from both engines, seconds before the crash, according to a recording posted on liveatc.net, a respected aviation monitoring website.

“We are returning back, sir, we have lost engines,” a man was heard saying in a recording released by the website. The airport controller freed two runways but  moments later the man called, “Mayday! Mayday! Mayday!”.

There was no further communication from the plane, according to the tape, which could not immediately be authenticated.

The PIA flight PK 8303 had taken off from Lahore at 1 pm and was supposed to land at Karachi airport at 2:45 pm when the crash happened.

Engineer Muhammad Zubair who survived the crash, told that the pilot came down for one landing, briefly touched down, then took off again.

After around 10 more minutes of flying, the pilot announced to passengers he was going to make a second attempt, then crashed as he approached the runway, Zubair said from his bed in Civil Hospital Karachi.

“All I could see around was smoke and fire,” he added. “I could hear screams from all directions. Kids and adults. All I could see was fire. I couldn’t see any people – just hear their screams.

“I opened my seat belt and saw some light – I went towards the light. I had to jump down about 10 feet to get to safety.”

Ambulances, fire tenders and relief teams had to face a large crowd gathered at the crash site.

“The first priority is to rescue the people. The main hurdle is narrow streets and presence of ordinary people who gathered at the place after the crash but they have been dispersed,” the minister said. 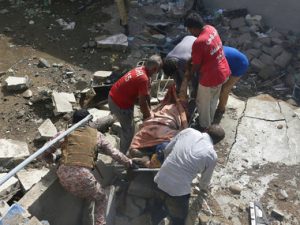 Television footage showed rescue crews combing through debris strewn across the streets of the district – 3 km north-east of the airport – where a number of houses have been destroyed.