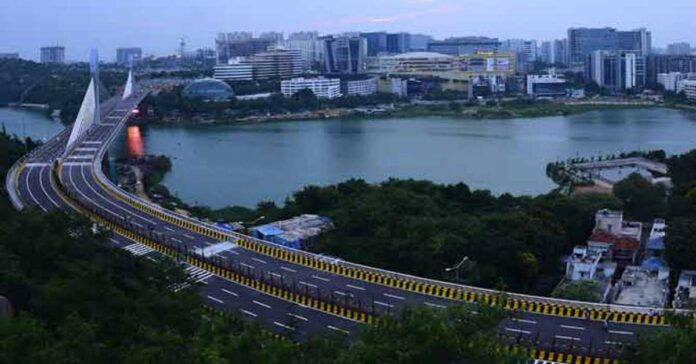 Yet another project under the Strategic Road Development Programme (SRDP) has been completed and is now ready to be thrown open to traffic.

Four-lane elevated corridor from Jubilee Hills Road No 45 to Durgam Cheruvu likely to be opened this week.

The four-lane elevated corridor from Jubilee Hills Road No 45 to Durgam Cheruvu. It integrates with the cable stay bridge. It is completed and is likely to be opened for traffic this week.

The structure is 1,740 metres long and is 16.60 metres wide, facilitating four-lane traffic flow. The structure is expected to reduce congestion on Jubilee Hills Road No 36 and the Madhapur road, which is known for frequent accidents because of a lot of sharp curves, significantly.

Though the construction of the structure had begun in April 2018, it got entangled in property acquisition issues and the exercise took more time than anticipated by the civic body officials. Apart from this, 55 piers had to be installed as part of the structure. There were many other engineering challenges for officials since limited time was allotted for completion of the works, citing heavy traffic flow.

However, lockdown had come as a boon and officials made up for this delay by expediting the works during the lockdown. Taking advantage of the lockdown restrictions, they could complete the structure even before the cable-stayed bridge was ready for inauguration.

They could complete the works three times faster than the regular pace, as there was no traffic due to the lockdown restrictions.