Rajasthan milkman’s daughter is set to become a judge, ‘My chappals would be smeared with the cow dung’ 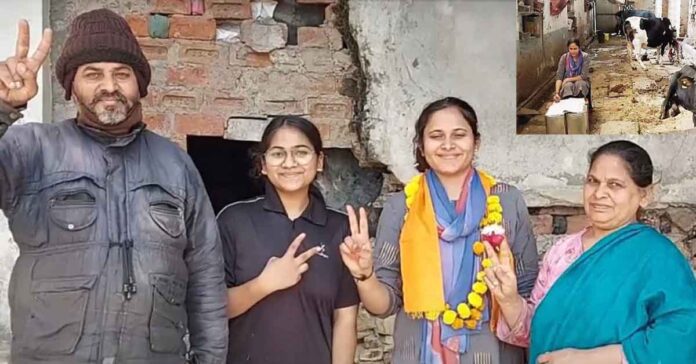 A 26-year-old girl, Sonal Sharma, the daughter of a milkman in Rajasthan, is all set to become a first-class magistrate in a sessions court in the state after a year’s training.

Sonal Sharma, a milkman’s daughter, studied in a cowshed, is now set to become a judge in her first attempt at the Rajasthan Judicial Service (RJS) examination 2018. This 26-year-old is a gold medalist and has received three gold medals for topping BA, LLB and LLM exams. She will be soon posted as a first-class magistrate in a sessions court in Rajasthan after a year’s training.

Sonal, is the second of four children of milk man Khyali Lal Sharma. Sonal begins her day at 4 am. She helps her father in milking cattle, cleaning the cow shed, collecting dung and distributing milk.

The RJS 2018 results of were declared in November 2019., but Sonal was placed in the waiting list. The state government issued an order asking the candidates in the wait list to join on Wednesday, as some of the selected candidates did not join the service.

Sonal’s mentor Satyendra Singh Sankhla expressed that “We were confident of Sonal’s selection. But she fell just one mark short in the general cut off list and was put in the waiting list,”

When Sonal got to know that seven candidates who got selected but didn’t join RJS 2018, she filed a writ with the Rajasthan High Court in September. She got a notification from the HC on Wednesday to join one of the seven seats that were vacant.

Sonal never went to coaching classes or tuitions. She used to travel on a cycle to her college early to spend hours in the library as she couldn’t afford the expensive books.

Sonal said that her parents have worked hard to provide the best education to them. Her father has taken numerous loans to meet the expenses in educating them but never complained. She said that she’s happy that she can give them a comfortable life now.

She lives in a small house where her study table was at a corner in the cowshed, made of empty oil cans.

She said that as a child, she would feel ashamed to tell her classmates that she was from a milkman’s family. “Most of the time, my chappals would be smeared with the cow dung. But now, I feel proud of my parents,”