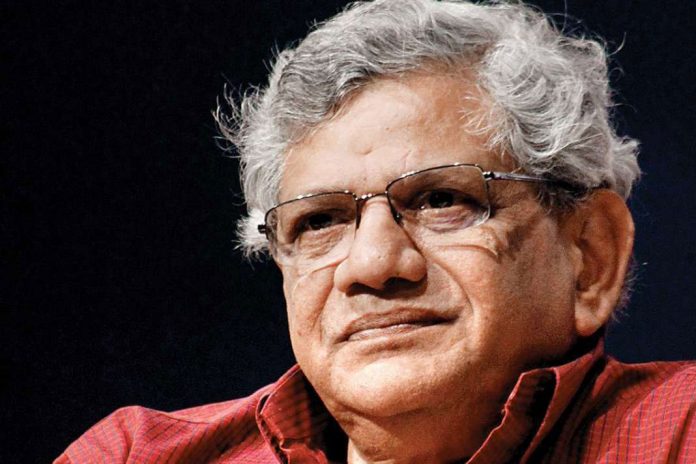 Communist Party of India-Marxist (CPI-M) general secretary Sitaram Yechury writes a letter to President of India Ramnath Kovind. He wrote about the impact of the present situation on people of India and government must compensate employers. He requested the President to halt the ongoing pay cuts and lay-offs in the private sector. He suggested that the government must compensate employers and help them cross the economic recession that has  worsened because of the lockdown.

Mr. Yechury had written letters to Prime Minister Narendra Modi and Finance Minister Nirmala Sitharaman earlier but it did not draw any response.Hence, Sitaram Yechury writes a letter to President.

“The economic consequences of this lockdown have further exacerbated the recession that had set in before the outbreak of the pandemic,” Mr. Yechury said. He tried to bring to the notice of the government few things which were happening in our country. Though the government has ordered that salaries should be maintained but in practice this is not happening. The business has come to a standstill hence the employers are saying that cannot pay salaries.

What other countries are doing?

“The governments of many countries have undertaken to compensate employers, some to the tune of 80% of their wage bill. ‘Your government’ [the President’s government] should likewise announce such a measure,” Mr. Yechury said.

He added that crores of people have lost their livelihood and there was a severe crisis of mass hunger and shortage of food. “In the central FCI (Food Corporation of India) godowns in the country, there is a stock of nearly 7.5 crore tonnes of foodgrains. Rather than this stock becoming rotten or feeding rodents, it should be immediately lifted and dispatched to the States for distribution among people who have lost their earnings,” Mr. Yechury added.

He asked the State governments to take the responsibility for the migrant worker. He also requested President Kovind to give suitable directions that the deferment of EMIs (equated monthly installment) on loans is interest free. The current announcement by the Reserve Bank of India for deferring EMIs comes with accruement of interest.

“It is a matter of serious concern that attempts are being made to blame a particular community for the spread of the virus. The organisers of the Tablighi Jamaat [event in New Delhi] were very irresponsible. This, however, cannot be the excuse to target the Muslim community as a whole,” he added..

Mr. Yechury implored President Kovind as the “custodian of the Constitution” to not allow communal polarisation to grow in these trying times when the country needs to be united in its fight against an enemy that does not distinguish on the basis of identities of religion, caste, class, etc.

“Please impress upon your government that what is needed is human empathy not criminalisation,” he wrote.